The suspense is killing us.

For the past several weeks, the price of Bitcoin has been dancing just above the $30,000 support level–sometimes dipping below and occasionally making strong moves toward the $40,000

But every time Bitcoin seems to make a decisive move one way or the other, it’s only a matter of hours before BTC retreats to familiar territory: price levels around $31K, $33K, $35K with no clear path forward.

Bitcoin’s relative stagnancy around this level has caused a bit of division amongst analysts attempting to predict what could happen next. Some believe that BTC is just moments away from regaining its losses and riding a rally to $60K and beyond by the end of the year. In June, some analysts have predicted that BTC could reach as high as $200,000 by the end of 2021.

However, not everyone is so optimistic. If Bitcoin falls to sustained levels below $30K, some analysts believe that BTC may be in for a prolonged depression before any upward movement is possible. Thus, Bitcoin seems to be in a rather precarious position: while BTC seems fairly stable above $30K, movement below $30K could lead Bitcoin to new lows. So what’s next for Bitcoin? 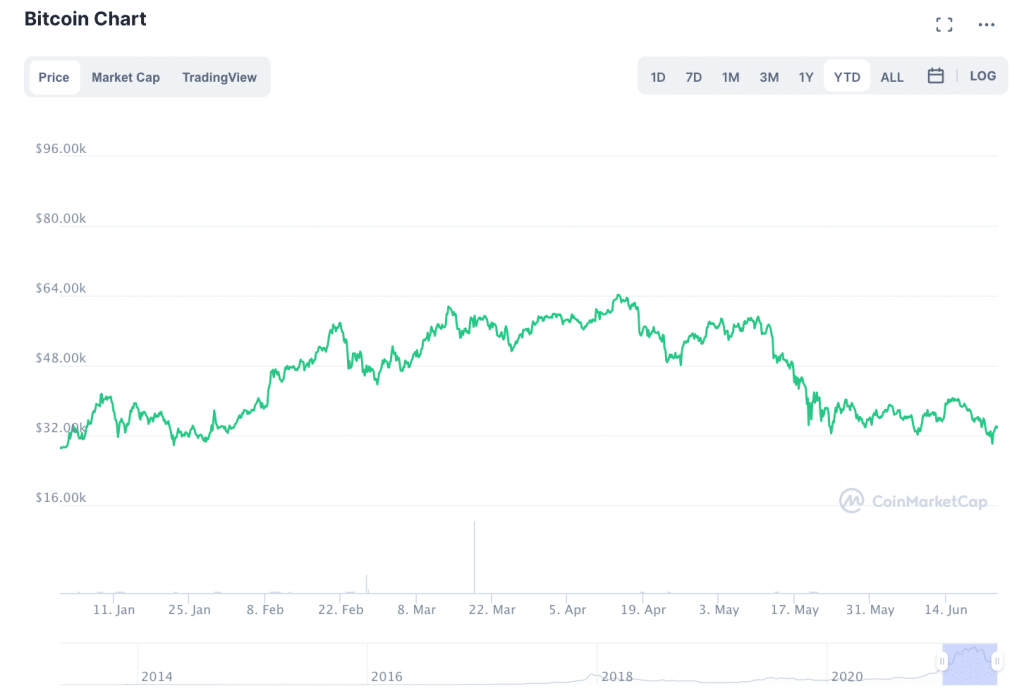 Would a move below $30K trigger another wave of leveraged Bitcoin liquidations?

“If Bitcoin drops below $30K for more than a few hours, it will cause a worldwide panic from traders and people searching for places to buy BTC,” said Kelan Kline to Finance Magnates. Kline is a personal finance expert and co-founder of The Savvy Couple,

A prolonged movement below $30K could essentially trigger a series of events that closely resemble what happened to Bitcoin markets in May of this year: “Exchanges will be under extreme pressure with too many customers on the website at once, causing market instability in both fiat and cryptocurrency markets.”

“When it’s trading time in Asia, Bitcoins liquidity could be significantly lower as traders would follow suit of selling their bitcoins off as well, which would create an even larger waterfall effect on the global financial system.”

One point of possible positive news for Bitcoin is the fact that it actually did briefly fall below $30K earlier this week–and it did not trigger a new wave of liquidations, as some believed it would.

In fact, some analysts see the drop below $30K as a sort of non-event: Marco Van Den Heuvel, Head of Community at decentralized search engine Presearch, told Finance Magnates that “This dip honestly did not come as a surprise.”

“Breaking $30,000 pretty much indicated we would see $28K levels, followed by hopeful support and a bounce. Which is what we saw starting just now, back to $31,500,” he explained.

In fact, Van Den Heuvel pointed out that any further drops below $30K could be a good thing for Bitcoin’s price levels in the long term. After all, the price drops may present opportunities for longer-term hodlers with “diamond hands” to scoop up BTC at a discount.

“They are key levels in which a lot of buys are waiting to scoop up ‘cheap’ Bitcoin,” Van Den Heuvel said. “Personally, I believe we’re trading around support levels now for Bitcoin, whereas altcoins can still see another 30-40% decrease in price if bitcoin dominance actually attempts the 50% retest and successfully breaks it.”

“Realistically, we haven’t lost all gains in 2021,” he continued. “Bitcoin is trading around January 2021 levels, as are many altcoins. I feel like this event puts many people back into reality; making money is ‘easy, but keeping it is a different skill. It requires stone-cold decision making, rather than being permanently bullish.”

“Risk management is important. It’s also clear how much speculation there is still in this space, and how people’s emotions take over, resulting in a [downward] spiral of events.”

How deep is this downward spiral? “To me, current sentiment shows we’re hopefully close to a bottom,” he said. “Many people that capitulate now may not find their lower buy orders hit.”

Indeed, under current market conditions, Bitcoin may not be poised to drop anytime soon–but negative news could bring a new round of bearish movements to BTC.

Ben Reynolds, the founder of Sure Dividend, pointed out to Finance Magnates that Bitcoin is still reeling from negative news that hit the headlines in May: “China has recently cracked down more on crypto by banning more crypto-related social media accounts on Weibo,” he said, adding that Elon Musk’s twitter drama may have influenced Bitcoin.

Reynolds also pointed to “the FBI reclaiming the millions of dollars worth of bitcoin from the pipeline ransom hackers group,” which he said “[proves] that governments can still manipulate it even when it’s not regulated, which could have some investors who prefer to question their investments.

These pieces of news–and any other negative reports that could come out soon–may continue to wash out new money from bitcoin markets. “Any new investors who are susceptible to emotion and fear clouding their investment decisions might be the ones who pull out and cause BTC to drop below $30K,” Reynolds said.

On the other hand, positive news updates about Bitcoin could act as a boon for crypto prices–and positive developments are underway: “Businesses are developing bitcoin ETFs, allowing customers to buy, sell, and checkout by using crypto. The FBI used it to reclaim a ransom and also strengthened its ability to become more mainstream.”

“Investor fixation on every little price fluctuation is derailing the ecosystem from what it’s supposed to be doing.”

And while $30K seems to be Bitcoin’s “magic number” of the moment, Kirobo chief executive Asaf Naim pointed out that BTC analysts and investors often become fixated on certain price points.

“We all know that investors can panic when they see an asset fall below the price they consider symbolic,” Naim told Finance Magnates. But let’s not forget that these numbers are arbitrary – back in 2017, $20,000 was considered the magic number for Bitcoin.” In the years between 2018 and 2020, it was all about Bitcoin’s so-called “curse of $10,000.”

Indeed, Bitcoin’s big price rally from November of 2020 until May of 2021 reset the global mindset about where Bitcoin should be price-wise. Before the chain of liquidations that sent the price spiralling in May, some analysts and investors believed that a steady price above $50K could soon be Bitcoin’s new “normal”–however, BTC has failed to regain enough momentum to sustain levels above $40K for weeks.

Now that the latest round of hype seems to be over, the conversation around Bitcoin seems to be shifting away from how big BTC will be and back towards how it can and will be useful to the world.

“I think that if people would focus on the very real, practical applications of decentralized technology instead of obsessing over whatever mood Bitcoin has decided to be in on a given day, they’d find that the fundamentals of the crypto market as a whole are rock-solid,” Naim told Finance Magnates.

“Frankly, I think that investor fixation on every little price fluctuation is derailing the ecosystem from what it’s supposed to be doing – upgrading the way the world transacts through decentralized technology.”