It’s officially been a year.

A year of the “new norm.” A year of quarantining, of remote work, N19 masks, and social distancing. For many, a year of financial stress, mental health challenges, a year of loss. One year of COVID-19.

While the exact dates that quarantines began in the western world vary from country to country, this week marks the week when the whole world became serious about the coronavirus. Europe and North America had been watching reports on the spread of COVID from China and other parts of Asia for weeks; the World Health Organization (WHO) was warning that a global pandemic may be imminent.

Then, on Friday, March 13th, 2020, US President Donald Trump declared a state of emergency in the country; the same day, World Health Organization officials declared that Europe had become the new epicentre of the COVID-19 pandemic.

In the days leading up to the declarations, financial market crashes–the likes of which have not been seen in over a decade–began to wreak havoc on capital markets around the globe. Oil prices turned negative; the Dow Jones Industrial Average (DJIA) plunged 6,400 points–roughly 26%–in just four trading days.

One of the starkest crashes came in cryptocurrency markets. On the second Thursday in March, 2020, the price of Bitcoin fell nearly 40 percent, crashing from nearly $8000 to around $4,700 in a matter of hours. Simultaneously, crypto’s total market cap lost approximately $30 billion, also dropping a total of 40 percent.

Today, March 11th, is the second Thursday in March, 2021–one year since the day that eventually came to be known as “Crypto’s Black Thursday.”

And what a year it has been.

When the crash occurred on March 12th, Bloomberg compared the price drop to the bursting of the crypto bubble in late 2017. A number of crypto critics also said that the moment was proof that Bitcoin was not, in fact, the “safe haven,” “hedge against inflation” asset that so many Bitcoin “believers” said that it was. 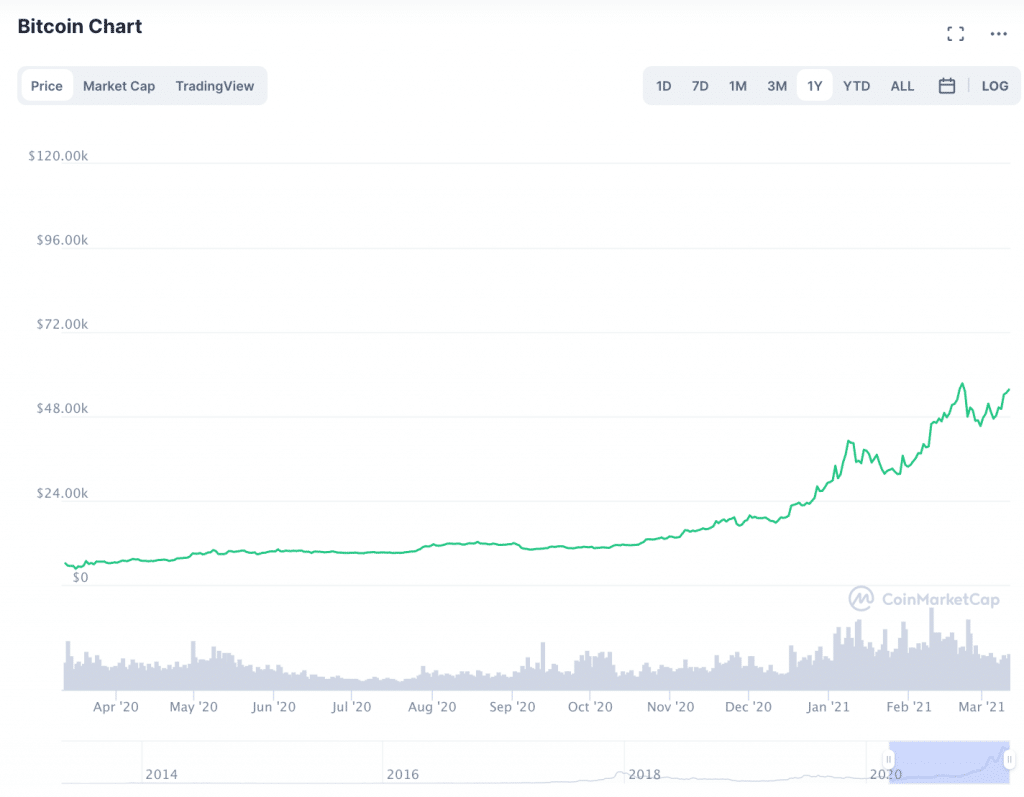 On March 12th, 2020, renowned Bitcoin bear and founder of EuroPacific CapitalPeter Schiff told Kitco News that Bitcoin is “not a safe haven asset. It is a very risky asset. The price of bitcoin has collapsed by more than the stock market during the last several weeks and in fact, it’s not even a non-correlated asset.”

However, while Black Thursday may have cast doubt on Bitcoin’s long-term viability, BTC quickly made a remarkable comeback. By May of 2020, BTC was back up at nearly $10K a pop, and maintained levels above $8K for the rest of the year. Today, the price of a single BTC is nearly $55,000–a rise of more than 1000 percent.

What happened on Crypto’s Black Thursday?

Do Kwon, Co-Founder and CEO of Terraform Labs (TFL), explained that the primary factor that drove financial markets to crash across the board last March was fear.

“March 12th, 2020was when the S&P 500 and markets around the world crashed from the fear and economic chaos induced by COVID-19,” Kwon told Finance Magnates.

“Bitcoin and other cryptocurrencies, which are more volatile, also fell in parallel to legacy markets which created the type of massive drawdown that was experienced. There were also other factors at play, including many Bitcoin investors being over-leveraged with derivatives contracts; that created a cascading set of sell orders on BTC-denominated perpetual swap contracts, pushing the price down further.” 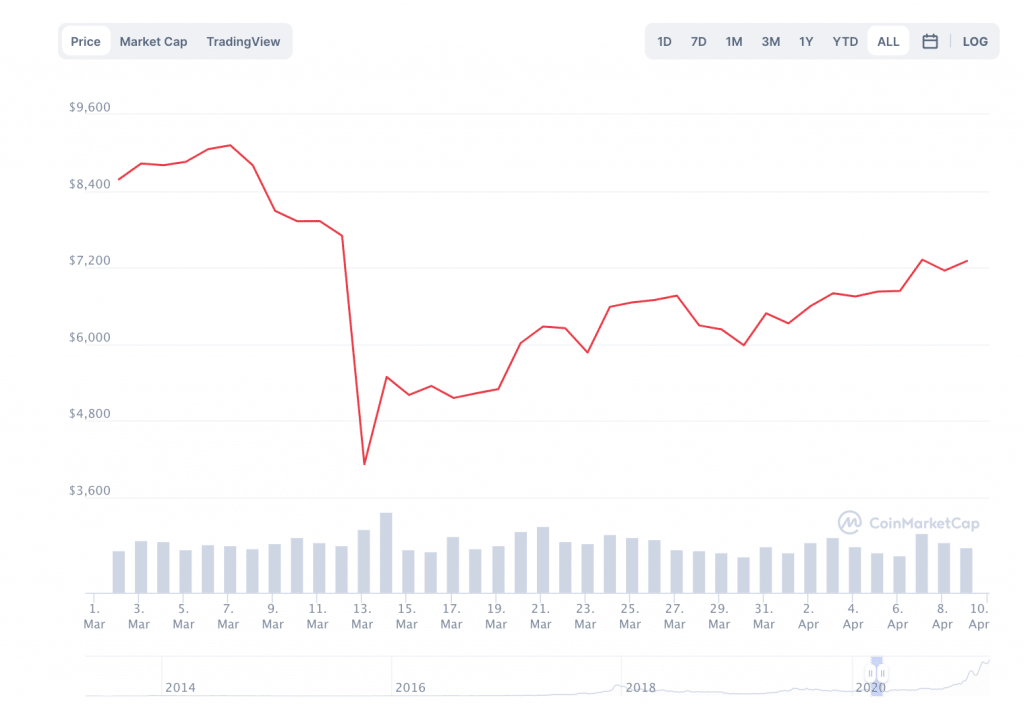 However, Steve Ehrlich, chief executive of Voyager Digital, explained that while Black Thursday was certainly a moment of reckoning for Bitcoin, it may have also marked a pivot point for the future of the digital economy.

“As real clarity around the implications of the pandemic set-in, it became apparent that lockdowns would go into effect, the digital economy would become quintessential and that economic stimulus would become necessary to keep the economy afloat,” he told Finance Magnates.

“[Black Thursday] has provided, in a sense, a psychological floor to build on,” Schwenk told Finance Magnates. “The shock and uncertainty of that moment led markets to regroup… and lowered volatility.” This momentum to rebuild initially consolidated “around $10k for BTC and then pushed higher as continued positive or clarifying news brought buyers into crypto markets.”

After Black Thursday, ”Bitcoin reached an inflection point of adoption from institutions.”

Beyond the effects of fear and doubt, the market crash that took place in March of 2020 led to important changes in monetary policy that have had profound effects on the price of Bitcoin.

For this reason, Do Kwon pointed out that “in hindsight, [Black Thursday] was a great time to buy both Bitcoin and legacy markets.”

“Over the course of 2020, a deluge of fiscal stimulus helped contribute to Bitcoin’s store-of-value or ‘digital gold’ narrative that increased awareness of its long-term potential.”

After Black Thursday, “what followed was months of news of the U.S. Government printing trillions of dollars to stimulate the economy and provide economic relief. In fact, 20% of all dollars ever printed since the origins of the U.S. Dollar were printed in 2020,” Kwon explained.

“This massive influx of U.S. dollars into the economy at a rapidly increasing velocity due to lower interest rates, left investors rushing to find the best place to invest their dollars to combat inflation.”

This is what led a growing number of institutional investors into BTC. “Bitcoin, being a scarce digital asset, with a strict 21-million hard cap supply, and its rapid rate of adoption led Bitcoin’s value to sky-rocket and continue hitting all-time highs, far surpassing its previous 2017 peak,” Kwon explained.

“[…] Bitcoin reached an inflexion point of adoption from institutions, who began pouring in money as a long-term hedge against inflation. With the halving occurring in May 2020 after the crash, the supply of Bitcoin issued by the protocol was reduced by 50 percent, which also reduced the liquid supply available to the market — making BTC more scarce.”

“Microstrategy, Tesla, Square, Ruffers, and others have all gone in on Bitcoin. Other Fortune 500 companies will probably follow suit and buy chunks of Bitcoin, as well..Now, even Ethereum has become a major investment option, with companies like Meitubuying $22M worth of ETH.”

But it wasn’t just institutional investors that came in droves for cryptocurrency in 2020. Steve Ehrlich, chief executive of Voyager Digital, explained to Finance Magnates that “as people across the world were restricted to their homes, many small businesses had to reduce their operations, retail investors were looking for new avenues to invest and trade for supplemental income – causing a surge into cryptocurrency investing.”

Digital Asset Research’s Doug Scwhenk also pointed out that in addition to monetary policy changes and an increasing pool of BTC buyers, crypto has also been positively affected by “a wave of positive regulatory events that give institutional investors comfort.”

For example, “the new US administration has nominated a chair of the SEC with prior crypto experience, ETF’s have launched in Canada and Bermuda, and the OCC clarified banks can hold these assets. “

Additionally, “storied institutions such as Bank of New York Mellon and Northern Trust have declared public plans and offerings in the space. All of this has served as tremendous tailwinds after an initial shock and great unknown about how our lives would be affected by COVID.”

If these positive regulatory trends continue in 2022, Bitcoin’s explosive growth could continue. Now that it’s been twelve months since Black Thursday, what could crypto markets look like twelve months in the future?

Do Kwon said that while, “it’s impossible to know,” what the future will hold, “at the current rate, it wouldn’t be surprising if we begin to see accelerated adoption of Bitcoin and DeFi by more mainstream investors.”

“Better UX, more capital, better infrastructure, and broader awareness are all ingredients for onboarding more users to a new financial system — one that is more inclusive and open,” Kwon said.

Though it might not arrive in 2022, Steve Ehrlich also sees a financial paradigm shift in the future. “More than just a new monetary technology, Bitcoin is an entirely new economic paradigm: an uncompromisable base money protocol for a global, digital, non-state economy,” he said. “It promises to mark the separation of money and state.”

“Bitcoin presents us with an opportunity to reinvent gold and rethink money for the digital future in a more globalized, internet-native way. For those, and many more reasons, Bitcoin and cryptocurrency will continue to enjoy progress and pursuit of a new economic reality.”

Therefore, Bitcoin could reach unprecedented levels in the twelve months ahead: “originally, the idea of a $100,000 Bitcoin seemed like a complete stretch of the imagination, but has now become like a seemingly reasonable target for the rising digital asset,” he said.

“We see cryptocurrency and digital assets going completely mainstream, disrupting traditional financial institutions, and giving economic empowerment to people all over the world in need.”