Over the past decade, the cryptocurrency sphere has risen from virtual obscurity to financial stardom. Just over 10 years ago, Bitcoin was nothing more than a project that a pseudonymous cryptographer had created and released into the wild.

Because of crypto’s humble beginnings on cryptography web forums, cryptocurrency still has heavy associations with meme culture. One of the best examples of this is Dogecoin (DOGE), a recent

Dogecoin was recently thrust into the spotlight when some of the same r/WallStreetBets traders that caused the GameStop rally turned their attention to DOGE. Within days, the traders pumped the price of Dogecoin from $0.007 per token to $0.07 a pop, a rise of roughly 1000%. 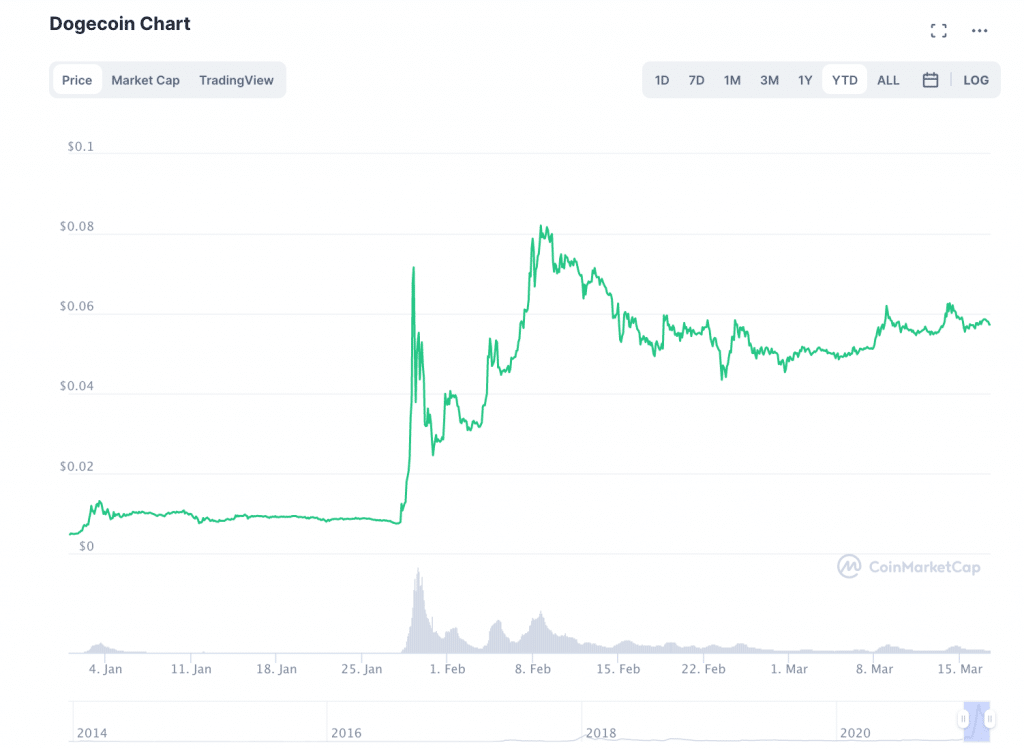 Simultaneously, Tesla Elon Musk seemed to be developing a bit of a fascination with Dogecoin. A number of analysts believe that Elon’s tweets about the coin are a big part of its recent popularity and consistently higher price point.

But what is Dogecoin, really? Where did it come from? And why is Elon Musk so obsessed with it?

Elon and DOGE: A Love Story

Elon Musk’s first public nod to DogeCoin came on In April 2019, when he tweeted that DOGE “might be my fav cryptocurrency. It’s pretty cool.”

Dogecoin might be my fav cryptocurrency. It’s pretty cool.

However, Elon’s real love affair with DogeCoin appears to have begun toward the end of 2020, when he began tweeting and speaking about Dogecoin fairly regularly. Then, after WSB traders appeared to embrace DOGE’s

Though it appeared that Elon’s fascination with Dogecoin started as a joke, the world took his words very seriously: many of the tweets that Elon made about Dogecoin sent the price of DOGE skyrocketing. 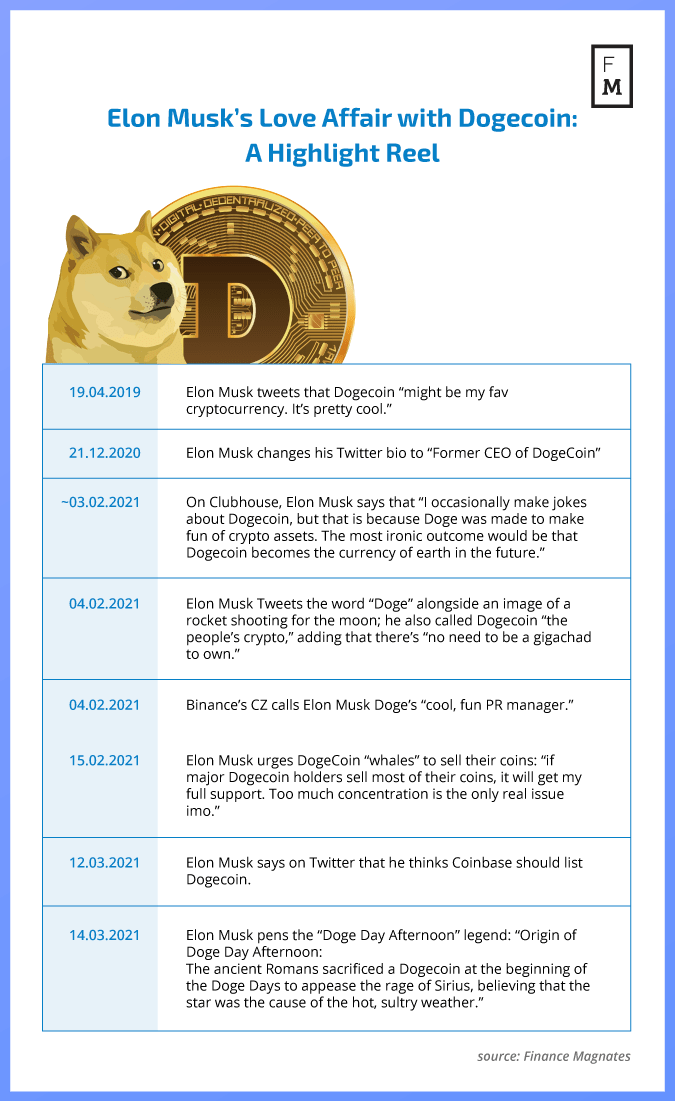 “Dogecoin is the people’s crypto,” Musk wrote on February 4th. “no need to be a Gigachad to own…no highs, no lows, only Doge.” He posted a meme of himself as Rafiki from the Lion King holding a Doge-Simba up to the sun with the words “ur welcome;” he also wrote the word “Doge” alongside an image of a rocket shooting for the moon.

Within the days that followed Elon’s stream of DOGE-related tweets, several other celebrities jumped on the Dogecoin wagon. Snoop Dogg joined in the fun on Saturday, February 6th, when he tweeted an altered picture of one of his album covers with the words “Snoop Doge,” tagging Elon Musk.

KISS frontman, Gene Simmons, also tweeted on February 6th that “I bought even more dogecoin. Why? Because I believe it will go up. But, that’s just me.” Simmons referred to himself the “God of dogecoin.”

Then, on March 8th, Mark Cuban bragged that his basketball club, the Dallas Mavericks, was the largest DogeCoin merchant in the world.

It’s been unclear exactly what Elon Musk is after with his very public fixation on Dogecoin. Musk’s fascination with DOGE seems to have started as a joke. However, over time, some of the statements that he has made about Dogecoin appear to be fairly serious.

For example, on February 15th, Musk tweeted that he was willing to buy out Dogecoin whales in order to make DOGE a less-centralized asset. Musk also recently said that he believes that Dogecoin should be listed on Coinbase.

Eventually, Musk’s fixation with Dogecoin seemed as though it may have landed him in hot water. Rumours that the SEC would be probing Elon over the tweets were reported by newswire service First Squawk, who cited sources familiar with the matter in late February.

However, Elon appeared to take the rumours in stride. “I hope they do!”, he tweeted, referring to the SEC. “It would be awesome!”

I hope they do! It would be awesome 🤣🤣

“Whether or not this is all one big joke is a tricky question.”

Despite all of the hype (and the trouble), it’s still a bit unclear what Elon really thinks about Dogecoin.

merchant banking advisory, told Finance Magnates that “the difference between Elon Musk and the vast majority of cryptocurrency experts out there is that Elon Musk has the most to lose in terms of reputation and credibility.”

Traders Staying Ahead of the Game with EuropeFXGo to article >>

“He does not operate in the shadows or under a pseudonym, nor does he depend on crypto picks to make a living considering he is the head of the world’s most prolific firms with a market cap of over USD $800 billion,” Gouran told Finance Magnates.

As such, “Hundreds of millions of people around the world treat him as a prophet of investing, and I believe it goes without saying that he would not stake that on something he was not serious about. While my reach or influence is nowhere near that of Elon Musk’s, I also have a reputation to uphold and can confidently provide a ‘conditionally’ positive rating of Dogecoin as a cryptocurrency.”

Still, “whether or not this is all one big joke is a tricky question,” Gouran told Finance Magnates.

“Fundamentally, DogeCoin in and of itself is a joke. I call this class of cryptocurrencies Memecoins, which are essentially intended to be ‘just for fun’ and not treated as seriously as cryptos such as Bitcoin and Ethereum.”

“The analogy I would use is that they are like arcade tickets compared to real money. They have use in a specific context and with an implicit understanding that they’re not meant to be treated exactly like real money, but that doesn’t mean they can’t be treated that way when the stars line up.”

“The first thing I said was, ‘This is so funny. Then I said, ‘I should just make this coin.”

Yes, DogeCoin really did start as a joke.

According to Business Insider, DogeCoin was created as the result of an internet friendship between IBM software engineer Billy Markus and Adobe software engineer Jackson Palmer. The two men had not even met in person when they successfully married Bitcoin to the “doge” meme.

At the time, Mr. Markus told Business Insider that he saw a Tweet by Mr. Palmer, who jokingly posted “Investing in Dogecoin, pretty sure it’s the next big thing.”

“The first thing I said was, ‘This is so funny,’” Mr. Markus explained. “Then I said, ‘I should just make this coin.” Markus then built the Dogecoin protocol based on code from Litecoin and Luckycoin. Thus, Dogecoin was born.

Richard Gardner, chief executive of Modulus, told Finance Magnates that “In about 2017, our company actually profiled more than 1,000 cryptocurrencies, including DogeCoin, and our evaluation was that it was a parody cryptocurrency — designed to make light of some of the more ridiculous altcoins which were popping up around the time of time of its creation.”

The merits of DOGE

However, the fact that the cryptocurrency had so completely embraced the Doge meme didn’t mean that it lacked technical substance or legitimate use cases.

For “At the same time, the idea was to make a cryptocurrency that didn’t require a massive understanding of technology,” Mr. Gardner continued. “It quickly gained a following as an easy, fun, novelty because of the community surrounding it. It has become popular as a method of rewarding content creators on Reddit and other social media sites.”

Indeed, Dogecoin’s popularity on Reddit was so explosive that within a few weeks of its creation, its market cap rose to $8 million. A year later, DogeCoin’s market cap was approaching $20 million. 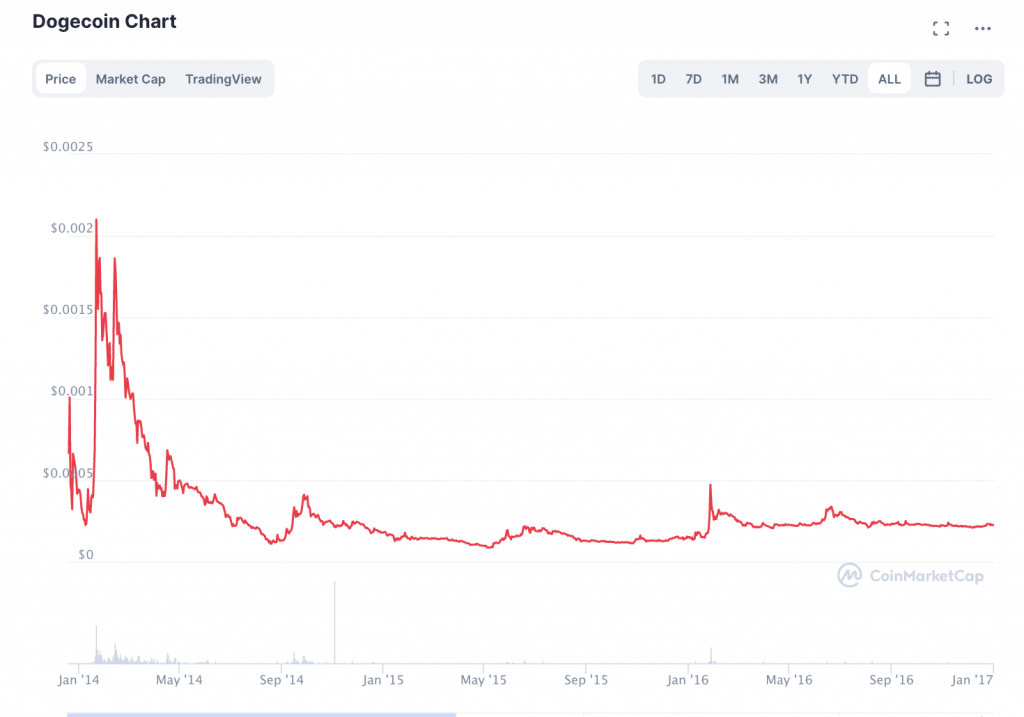 Even before Elon Musk began his fascination with DogeCoin, the coin was continuing to grow–and, in some cases to get legitimate recognition. For example, when Weiss debuted its Crypto Ratings chart in 2018, Dogecoin was given a “C”, which was the same marking given to XRP. (Needless to say, XRP fans were not exactly thrilled.)

Additionally, Richard Gardner pointed out that Dogecoin had a historical moment of its own right in August of 2018, when it Tweeted that “the system test of the DogeCoin-Ethereum bridge was completed and successful.”

Unfortunately, “Dogethereum” was a bridge too far. The idea behind the bridge that the update provided interoperability between the blockchains serving each cryptocurrency. Unfortunately, the project suffered a lack of funding and the bridge was not completed at the time.”

“There is nothing technologically unique about Dogecoin.”

Of course, DogeCoin does have its issues–specifically, there are a number of technical shortcomings that could get in the way of DOGE becoming “the people’s crypto”.”

Dogecoin is the people’s crypto

Gulf Pearl’s Shidan Gouran told Finance Magnates that “like most memecoins, there is nothing technologically unique about Dogecoin.

“Cryptos such as Ethereum, Stellar, and Ripple all have unique technological attributes which create some form of a value proposition.”

Why does this matter? Imagine two arcades: “if tickets to ‘Bob’s Arcade’ suddenly become valuable and Bill decides to open his own arcade and buys his tickets from the same vendor, there is nothing inherently unique or valuable about them,” he said. But if everybody likes Bill better than Bob and they decide to go to Bill’s Arcade instead, that popularity can create value for tickets at Bill’s Arcade, despite the fact that they both have the same tickets.”

“Remember that all blockchains use open-source software, which means there are no trade secrets or ‘secret sauce; involved when it comes to the sophistication of the technology. If it’s out there, anybody can make derivative works of it.”

Beyond DOGE’s technical limitations, there’s also the issue of its centralization. Binance chief executive Changpeng Zhao brought this up on February 4th when he referred to Musk as Dogecoin’s PR manager.

Gulf Pearl’s Shidan Gouran also told Finance Magnates that “when it comes to DogeCoin specifically, there is a high concentration of ownership in the total supply of tokens. Approximately 30% of the supply has been bought up by one entity over the past three years.”

“While this reflects a certain level of faith in the asset, it also reflects a vulnerability to market manipulation, which is something to bear in mind,” he said.

Elon Musk himself has attempted to address Dogecoin’s centralization problem. On February 15th, Musk urged DogeCoin “whales” to sell their coins: “if major Dogecoin holders sell most of their coins, it will get my full support. Too much concentration is the only real issue imo.”

So far, it seems that no one has taken Elon up on the offer. Still, Dogecoin seems to be more popular than ever. What’s next for Dogecoin? Let us know your thoughts in the comments below.

December 1, 20214 min read
sponsored Some say trading is a game of luck; others view it as an adventure…