It started as a joke (or, so it seemed.)

For months, Elon Musk has been ‘memeing’ about cryptocurrency. Throughout last week and over the weekend, Musk led the charge a triple-digit pump into DogeCoin (DOGE) with a number of tweets about the cryptocurrency. Over the past several months prior, he had referred to himself as the “former CEO of DogeCoin,” and posted a number of comically-intended tweets about DOGE, Bitcoin and crypto more generally.

Bitcoin is my safe word

Even though Musk’s crypto-themed tweets were never of a truly serious nature, the crypto community took the jokes as an important sign that Musk was, at the very least, noticing crypto, and that despite the jokes, he may have been developing a serious interest in it. After all, amidst one of Musk’s crypto tweet sprees, he got into a discussion with crypto investor, Michael Saylor about converting Tesla’s balance sheet into BTC holdings.

Are such large transactions even possible?

Still, for many, Musk’s interest in crypto seemed to be fairly lighthearted and primarily meme-driven. That is, until yesterday, when Tesla officially announced that it had invested $1.5 billion into Bitcoin, with plans to accept BTC in exchange for its products.

Daniel Polotsky, Chief Executive and Founder of CoinFlip told Finance Magnates that many members of the crypto community have believed that it “only a matter of time before [Elon Musk] or Tesla at large would make a public move” into crypto.

“The size of the investment seems fitting coming from the company behind the world’s richest man,” Polotsky added.

Most analysts in the cryptocurrency industry seem to agree, this is huge news.

“This moment will likely be looked upon in years to come as a genuine tipping point,” said Dermot O’Riordan, Partner at the blockchain-focused private-equity firm, Eden Block, to Business Insider. “Elon and Tesla’s support legitimizes crypto and opens up bitcoin to a whole new class of retail and institutional investors. Now it seems all of Wall Street is in bed with this industry – if they weren’t paying attention before, they are now.”

Indeed, the news that Tesla bought into Bitcoin instantaneously made headlines across a number of the world’s most prominent news publications. As such, money began to pour into crypto markets, particularly Bitcoin.

Michael Vogel, Chief Executive and Founder at Coinstream, told Finance Magnates that: “The already-excited crypto market, which has been experiencing a prominent bull run, reacted to the Tesla news by reaching an all-time high, pushing over $47,000 USD per Bitcoin.” 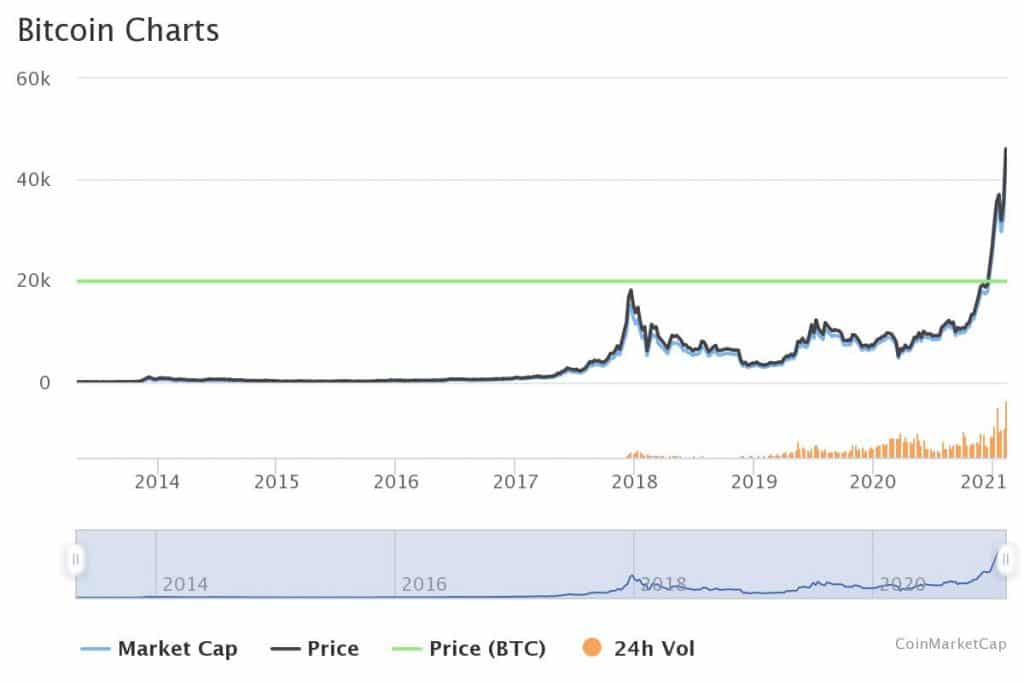 A number of analysts have pointed out that the announcement of Tesla’s BTC investment has already likely made quite a bit of money for the company. Supposing that Tesla purchased Bitcoin for roughly $38K a pop, where it was for much of January, the rise to $47K would have increased the value of the holdings by more than 20 percent, making the total investment more than $1.8 billion.

The crazy thing is that if you think that @Tesla bought the $1.5 billion worth of #Bitcoin with an average of $38k (which is reasonable for January) he’s now at $46k already up more than $300 million.

“Many Are Expecting This to Lead to a Wave of Corporate Money Entering the Fold.”

Like O’Riordan, Vogel pointed out that institutional investors who may have been on the fence before could see Tesla’s investment as a sort of tipping point: “Many are expecting this to lead to a wave of corporate money entering the fold, and see the Tesla move as precedent-setting – in a sense, it’s ‘giving permission’ to other chief financial officers (CFO) to be comfortable holding Bitcoin on their own corporate balance sheets.”

Indeed, large companies who may have been on the fence about whether or not to get into Bitcoin could see Tesla as an example.

Luke Sully, Chief Executive at digital asset treasury solution, Ledgermatic, told Finance Magnates that: “This filing today gives every CFO and Audit Committee insight into how a publicly-traded company can take advantage of this versatile asset.”

Tesla’s Investment in Bitcoin Is Also a Matter of Reputation

“As big businesses are reducing their reliance on global banking infrastructure which is expensive, slow and complex to manage this is a particularly timely reminder that onchain infrastructure is accessible, cheap and fast if accessed securely,” Sully said.

Even before Tesla’s announcement, Musk’s involvement with crypto, lighthearted as it may have seemed, could have been a sign that Musk was so interested in cryptocurrency that he was willing to stake his reputation on it.

Top Crypto Trends for 2021 Every Trader Should KnowGo to article >>

Shidan Gouran, CEO of merchant banking advisory, Gulf Pearl, told Finance Magnates that: “The difference between Elon Musk and the vast majority of cryptocurrency experts out there is that Elon Musk has the most to lose in terms of reputation and credibility.”

“He does not operate in the shadows or under a pseudonym, nor does he depend on crypto picks to make a living considering he is the head of the world’s most prolific firms with a market cap of over USD $800 billion,” Gouran explained.

“Hundreds of millions of people around the world treat him as a prophet of investing, and I believe it goes without saying that he would not stake that [reputation] on something he was not serious about.”

What Does This Mean for Tesla?

Beyond Bitcoin itself, Tesla’s move into crypto could have big implications for the company. What will these look like?

Sully told Finance Magnates that the investment “doesn’t impact Tesla’s operating liquidity.” In other words, the Bitcoin investment is “carefully segregated away from anything to do with their day to day operations and cash needs.”

“If it’s gone through the audit committee it’s likely the plan would have been acutely stress tested on issues such as materiality and cash ratios to ensure the company is not exposed,” Sully explained, adding that “Tesla may have even diversified its exposure between direct holdings and arms-length ETF-style exposure, even though that is becoming prohibitively expensive to do.”

And Tesla has already stated that Bitcoin is not an investment for the company. “It’s a dual use-case for Tesla,” Sully said. The company has stated that it will accept Bitcoin as payment for its products in the future.

“We hope to begin accepting #Bitcoin as a form of payment for our products in the near future, subject to applicable laws and initially on a limited basis,” Tesla announced.

Both of these use cases “get tracked and accounted for separately,” Sully continued. “This is very similar to Square’s strategy.” Square famously purchased $50 million worth of Bitcoin in November of 2020. The company allows its users to purchase Bitcoin directly through its app. Additionally, Tesla has said that it may create its own channel that would allow customers to buy vehicles with Bitcoin.

RT @Reuters: Tesla may eliminate the middle man and create its own processing system that can be used to accept bitcoin and liquidate the payments whenever management chooses to, experts said. That would be an unusual step, because bitcoin is so volatile pic.twitter.com/wRHyqLMwua…

And, if things go the way that they have for Square, Tesla’s investment may have been one of the smartest moves that the company has ever made. When Square invested in Bitcoin in November, the cost of each BTC was roughly $10,617. Today, one BTC is worth roughly $46,420; as such, Square’s investment is now worth approximately $215 million. That is a rise of roughly 330% over the course of three months.

If Tesla’s BTC investment follows a similar trajectory, then the $1.5 billion investment that was announced yesterday could be worth nearly $5 billion in three months.

The Next Three Months

Of course, this would require a massive influx of capital into Bitcoin, in order for an increase of this size to happen, the price of Bitcoin would need to increase to roughly $130,000; the total Bitcoin market cap would have to increase to more than $2.41 billion.

It is a tall order, but hey, stranger things have happened. And, if other large companies start to follow in Tesla’ footsteps, BTC at $130K may not be as far off in the distance as it seems: a number of analysts in the crypto space believe that (like Tesla), it is only a matter of time until companies make their own investments into cryptocurrencies.

“Honestly, I’m not surprised that Tesla bought #Bitcoin and I won’t be surprised when Apple and Microsoft do it. Having $BTC is just common sense at this point,” wrote Samson Mow, Chief Executive of Pixelmatic, on Twitter.

Honestly, I’m not surprised that Tesla bought #Bitcoin and I won’t be surprised when Apple and Microsoft do it. Having $BTC is just common sense at this point.

But, there are still some technical hurdles that may need to be overcome in order for large institutions to feel comfortable investing large amounts of their assets into Bitcoin. Caitlin Long, Chief Executive of AvantiBT, pointed out on Twitter that: “Tesla confirmed it’s using indefinite intangible accounting, which is UGLY treatment (lower of cost or market+risk of impairment charges).”

“We bitcoiners must work to get bitcoin [accounting] fixed. It’s prob why Square only put 2% of its cash into #BTC,” she wrote.

2/ Why only 7.7% of cash? Well, @Tesla confirmed it’s using indefinite intangible accounting, which is UGLY treatment (lower of cost or market+risk of impairment charges). We bitcoiners must work to get bitcoin acctg fixed. It’s prob why Square only put 2% of its cash into #BTC. pic.twitter.com/dqO59cquQ4