The boom of non-fungible usage in the art world has garnered its fair share of criticism. If it’s not the environmental issues that NFT critics are concerned about, there are plenty of other things to point the finger at. After all, the NFT art world is still grappling with how to deal with fraud and security risks, among other things. In other words, NFTs are still relatively new in the professional art world. Therefore, they still have a ways to go.

However, non-fungible tokens are bigger–and older–than the world of art and music. While much of the world’s attention has been focused on the adoption of NFTs by the artistic world, NFTs have also been gaining ground elsewhere. Namely, in the world of electronic gaming.

Digital ownership is not a new concept for the gaming industry

In a way, NFTs and gaming are almost a perfect marriage.

After all, one of the tricky things about the concept of NFT ownership is the fact that “owning” an NFT is such an abstract concept in the artistic world. After all, art investors are used to the concept of owning a physical product. When one owns an NFT, it isn’t always completely clear what one actually owns.

For example, in a wide variety of gaming ecosystems, players have the ability to unlock special accessories that can be added to their characters or to the worlds that they live in. In certain games, these digital items can even be sold for real-world cash–and large amounts of it.

Indeed, Ed McCormack, chief executive of Dchained, told Finance Magnates that “the practice of creating digital items that are unique and can be traded based on their utility or scarcity, has become a sizable economy in the gaming industry for years.”

The problem with this sort of digital ownership in the gaming world is that it is very platform-dependent. Gamers who have invested their time and hard-earned money into the virtual worlds they occupy are at the mercy of the game’s operators. Errors, hacks, or discontinuation of a game could essentially erase the ownership of valuable digital items. Additionally, a lack of clear legislation to delineate what ‘ownership’ really means in the world of in-game property could mean that players have no recourse when bad things happen.

How can NFTs be used in the gaming universe?

For example, Stefan von Imhof, Co-Founder of the Alternative Assets Club (AAC), told Finance Magnates that “when game items are made into NFTs, the entire premise of ownership is changed. Non-NFT game items have real value since players value how they look or perform within the game,” he said.

“For example, ‘skins’ from Counter-Strike sell on the Steam marketplace for thousands of dollars. The downside for these players is that their account can get banned at any time, and if they want to sell items for real money outside of the closed game ecosystem they face a high risk of getting scammed.”

By contrast, “NFT game items mean that the game owner can never take the item away from the player and items can be freely sold for real money, without the high risk of loss to scams.”

Yat Siu, chairman and co-founder of Animoca Brands, explained that (in other words), “NFTs represent property rights – something that gamers have not really enjoyed before, because in traditional games the publisher owns the game assets and merely licenses them to the player.”

“Licenses can be revoked or suspended at any time and for a variety of reasons, regardless of the amount of money a gamer put into a game. That’s not ownership – at best it’s rental,” Siu explained.

“If you truly own something, then you have control over it. So when we say that any game asset can be an NFT, that means it can be yours to do with – and to benefit from – as you see fit. And it’s not just about selling it for a profit, it’s about doing things that are not possible with traditional game assets: you might want to use your NFT in a different game, or you could ‘stake’ it to passively generate revenue over time.”

“Any in-game asset can be an NFT.”

As such, video game creators and companies seem to be viewing NFT technology as the gateway to create robust in-game economies.

Nine Chronicles, a game created by open-source gaming platform Planetarium, is exploring how NFT ownership can play a role in its own digital world. Planetarium chief executive Kijun Seo told Finance Magnates that “because Nine Chronicles doesn’t have a server and players’ data lives on the blockchain, any item inside the game is already a non-fungible token, by definition.”

“Currently we have two different types of NFTs: Limited edition costumes (company created NFT): fleshed out NFT costumes with custom animations and bonus stats. Sold only during presale, tradeable in the P2P market. There are only 240 legendary-grade costumes, and 9 mythical-grade costumes in total.”

Similarly, Yat Siu, chairman and co-founder of Animoca Brands, told Finance Magnates that “any in-game asset can be an NFT.”

“Even the tracks and events are made up of NFTs,” Siu explained to Finance Magnates. “This allows the owner to have true ownership over those assets and consequently to trade the assets in secondary markets.”

And indeed, Non-fungible token tech in gaming could also facilitate the growth of healthier and more expansive secondary markets for digital gaming collectables.

Siu told FM that “there is a brisk trade of F1 Delta Time NFTs on the OpenSea marketplace.”

How to Trade In a Volatile MarketGo to article >>

“One of the most impressive aftermarket transactions for one of our products is the “Australia Edition 2020” car NFT acquired second hand for 1,221,221 REVV, worth approximately US$288,000 at time of sale.”

AAC’s Stefan von Imhof explained that in this way, “NFTs can change the revenue model for games that choose to integrate them.”

In addition to secondary-market sales of digital collectables that are produced by game developers, NFTs could also help to build in-game marketplaces where players can earn real-world money for the in-game products and services that they provide.

Von Imhof pointed to an upcoming blockchain-based game called Embersword. The game “will have an open world in which much of the land is owned by players. Those owners can choose what they want to put on the land (like a marketplace or an enemy spawn point) and in doing so shape the way the game world forms. They can then earn real money as players interact with their land.”

And, of course, there’s the simple fact that NFTs allow game developers to sell their products directly to players without the use of third-party intermediaries.

Ed McCormack explained that in this way, “NFTs also make it possible for creators in video game worlds to sell directly to other users. The allure of NFTs is that they creates a situation where content creators, whether they be game developers or musical artists, can sell directly to customers.”

It ain’t all sunshine and roses

While there may be many positives for integrate non-fungible token technology into the gaming economy, there are some drawbacks.

For example, Animoca Brand’s Yat Siu explained that “the  current biggest disadvantage is the non-recoverable nature of NFTs.” In other words, “if you lose the wallet where the NFT is stored, if your NFT gets stolen because you were hacked, or if you transfer the NFT to someone else by mistake, there is very little recourse.”

“This is why you have to treat NFTs responsibly like a real-life asset of value. You keep your jewelry in a secure lockbox, and you park your car in a safe and sheltered spot,” he said. “Likewise, you need to ensure that your digital assets are well taken care of and protected as NFTs can represent substantial value.

In addition to the possibility of permanent loss, “the other drawback of involving NFTs in gaming is the friction (in the form of transaction fees and costs) that engaging in a real digital economy can create.”

“Think of it as a sales tax that is paid not to a government but to the community that makes the blockchain network possible. In the case of the Ethereum network, that tax is known as ‘Gas’ and can be significant, making it difficult to onboard new users.”

“Fortunately,” he added, “there are many Layer 1 or Layer 2 blockchain solutions that can significantly reduce gas fees.”

Inside and outside of gaming, non-fungible tokens can balance the relationship between corporations and creators

But even with these drawbacks in mind, many analysts agree that NFTs are coming for gaming in a big way–and, possibly, for the rest of the world.

For example, Robbie Ferguson, co-founder of Immutable, told Finance Magnates that his company is in conversations with a number of “super interesting projects across Music NFT and Fashion NFT verticals.” 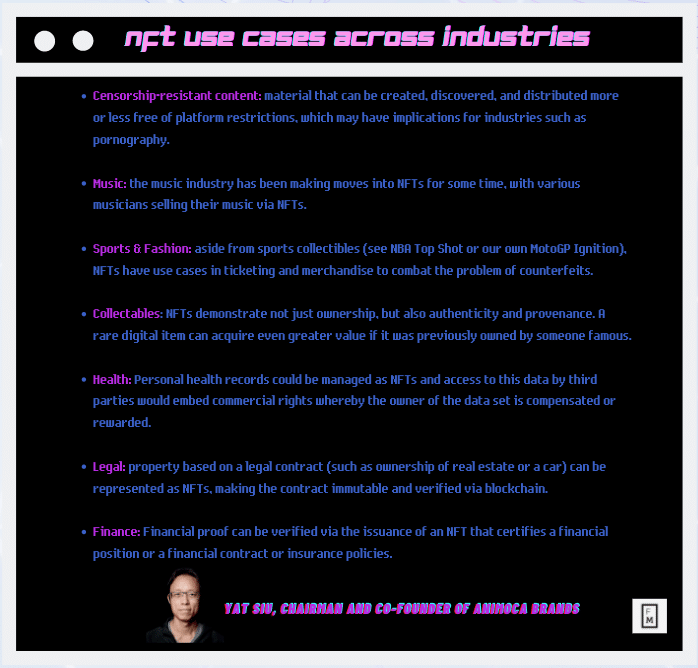 Hweover, Ferguson explained that non-fungible token tech can be used in any industry that is plagued by an imbalance of power between creators and market intermediaries.

“The characteristics of industries that NFT could disrupt are: a) intellectual property locked in restrictive ecosystems owned by companies; b) creator economics weighted in the favour of big corporations, not in favour of emerging creators,” Ferguson explained.

“NFTs will do to digital property what open source has done to coding.”

Many analysts believe that NFTs are here to stay.

Animonica’s Yat Siu told Finance Magnates that “in recent months, everyone has been focused on the sensational performance of NFTs in the art world but the story is even larger.”

“Imagine what the auto industry would be like if you needed permission from the car manufacturer to change the color of your car or install a new sound system – or if you were simply not allowed to make any such modifications,” he said. ‘That is the state of digital gaming and data until the arrival of blockchain and NFTs.”

“NFTs will do to digital property what open source has done to coding: provide substantial opportunities for creation and economic expansion. For example, NFTs already have the ability to be financed on platforms such as NFTfi, or fractionalized on platforms such as Unic.ly. These third-party providers developed exciting new services that benefit the owners of NFTs and do not require participation from the publishers and creators – much like how we engage with our property in the real world.”